I'm excited to share today's individual with you. If you enjoy driving an electric car, you'll be glad this person was born. Are you a fan of your electric blanket and appreciate the power in your home? Then you can thank this man. Albert Einstein had a picture of him on his office wall. The father of Nuclear Physics, Ernest Rutheford, stated: "When we consider the magnitude and extent of his discoveries and their influence on the progress of science and of industry, there is no honor too great to pay to the memory of Faraday, one of the greatest scientific discoverers of all time."

Michael Faraday was not your typical scientist in the 1800s. He received little formal education, yet he created the concept of the electromagnetic field in physics. Faraday also established the study of how the rays of light are directly affected by magnetism. 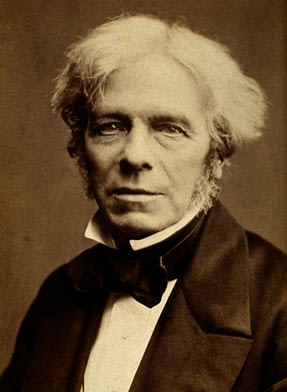 And, he discovered the principles of electromagnetic induction and diamagnetism and the laws of electrolysis.

You Can do This

I am a proponent of education, but as I have pointed out time, and time again, knowledge is not just found in school or textbooks. Furthermore, being curious about something and looking for the answers is just as powerful as getting straight A's in school. Faraday and Einstein are proof of this supposition.

Michael was an Autodidactic (self-educated) and worked as an apprentice at the age of 14. He was lucky enough to work for a bookbinder/seller in London. It was there that he had access to many books on all subjects.

Do you Have a Light?

Faraday focused his attention on two writers in particular. First was Isaac Watts and his book The Improvement of the Mind.  Watts was a hymn writer, theologian, and logician. One of his popular hymns was Joy to the World.

The second teacher was Jane Marcet. She was a Solonniere who inspired Michael with her teachings in science. He particularly liked her book Conversations on Chemistry.

I share this insight with you because there is great value in pulling all kinds of philosophy, science, and math into your autodidactic program. You never know when or how you'll use information, but it is clear you need all sources to expand your consciousness.

As Faraday got older and finished his apprenticeship, he befriended William Dance, one of the founders of the Royal Philharmonic Society. Dance was a musician but had many friends in the field of science. Through this friendship, Michael attended many of the lectures given by prominent English chemists at the Royal Institution.

He repaid Dance for his kindness with a 300-page book containing notes from all the lectures he attended. Dance was so impressed that he introduced Michael to Humphry Davy, the inventor of the Davy Lamp and chemist at the Royal Institute. Davy was impressed with Faraday and hired him to be his assistant at the Institute.

Faraday's knowledge and reputation grew, Subsequently in June 1832, the University of Oxford granted Faraday an honorary Doctor of Civil Law degree. He was even offered a Knighthood in recognition for his services to science, which he turned down on religious grounds. Michael was a Sandemanian, an offshoot of the Scottish Church. His religious beliefs included no riches or worldly reward for his work on earth. He stated that he preferred to remain "plain Mr. Faraday to the end."

One of Faraday's most popular discoveries and inventions was the Faraday Disk or Faraday Wheel (1831). His initial version was not efficient and wasn't a practical power source, however, it showed the possibility of generating electric power using magnetism. His invention led the way for commutated direct current dynamos and then alternating current alternators. It is, in fact, the reason we can send electricity to homes and devices. Think Nikola Tesla and the "Dynamo Electric Machine" (1886).

The Faraday Disk, also known as the homopolar generator, is a DC electrical generator with two parts. An electrically conductive disc or cylinder rotating perpendicular (upright) to a uniform static magnetic field. Movement is created between the center of the disc and the rim (or ends of the cylinder) with an electrical polarity that depends on the direction of rotation and the orientation of the field. In other words, it depends on what side of the magnet you use (positive or negative), you'll spin the disk to the left or the right.

In 1831, this technology changed everything. Can you imagine producing propulsion or energy with an ordinary magnet? As the years went on, many scientists and inventors took Faraday's invention and improved on it. For example, I told you, Nikola Tesla patented the Dynamo Electric Machine. He added another disk that was the opposite field and opposite of the other disk, so that the flow of current was from the one shaft to the disc edge, across the belt to the other disc edge, and the second shaft. This reduced friction and heat and made the Dynamo more efficient in creating electricity from movement.

I share this example with you to illustrate the unlimited potential of the human mind. In addition, I want you to see the advances made from Faraday to Tesla. In just 55 years, the world went from no reciprocal power to magnetic power. We are still using similar technology to power our cities and charge our cars and devices. It has been 135 years since Tesla created the Dynamo, and we get excited when a car company in his name comes out with a car that charges off the electric grid (coal, nuclear, and hydro). Yes, better batteries but the same electrical process as 100 years ago.

Ain't Nothing but a Thing

I think we can and have done better with creating energy from the sun, as well as advances in understanding neutrinos. Check out project IceCube to get an idea of just how important this technology is today. Here's a hint, neutrinos have no mass. How can something that doesn't exist, exist?

Furthermore, I think that we haven't seen all the advances our fellow world citizens have already created. Remember "free" energy doesn't earn a profit in this dimension (see water car blog). I plan on lifting my consciousness to the reality that focuses on enabling free energy so that we can all live in a higher standard. What about you?