The Power of Video

Last night I watched a report on the CBS News show, 60 Minutes, that discussed UFOs, or as they are now known, UAPs (unidentified aerial phenomena). Bill Whitaker was the correspondent conducting the interviews with several military personnel as well as some ex-government officials. The foundation of his interview regarded several declassified videos released by former deputy assistant secretary of defense for intelligence, Chris Mellon, to the New York Times in 2017. One of the videos shows a fighter squadron piloting F/A-18Fs doing combat maneuvers off the coast of Jacksonville, Florida, in 2015. The video has sound bites capturing the pilots talking about what they were seeing: Look at that thing, it's rotating! My gosh! They're all going against the wind, the wind's 120 knots to the west. Look at that thing dude!

- Check out video By clicking the blue link below to see unedited video from the pilots video camera.

This video is only possible because the Navy updated the pilots' video cameras to infrared. More on this point later. (click here for video footage UFO sighting)

When the former Navy pilot of that event, Lieutenant Ryan Graves, is asked, what do you think when you see something like this? He says this is a difficult one to explain. You have rotation, you have high altitudes. You have propulsion, right? I don't know. I don't know what it is, frankly. 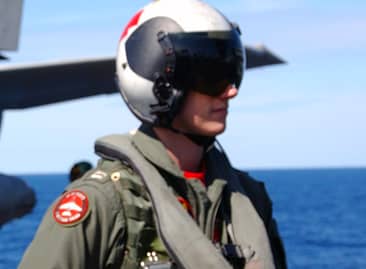 Here are 2 more videos from the Navy:

Watch The Other Hand

The story on CBS and other news outlets have started to cover this story and other events recently. Therefore, this is not just about the UFO phenomenon but more directly our National Security. Every interview I watched has a focus on U.S. security and not the new opportunity to shift the conversation to a new free energy source.

I urge you, the reader, to not get caught up in the hype of aliens coming to take over our planet. Make no mistake that this information about UFOs will be spoon-fed to you over the next several years and be the basis for yet another multi-billion-dollar investment from the taxpayers in homeland and outer space security.

My hope is we can ask more questions about the technology we are viewing, that seems to defy what we learned in our science and physics classes.  Things like ZPE, otherwise known as zero point energy that Tesla discovered in 1932, or perhaps Electrogravitic travel developed in 1920 by Thomas Townsend Brown.  We have always been told that those ideas were just theories or non-working prototypes.

I will leave you with this thought, J.P. Morgan was quoted asking Tesla about ZPE; "Does it have a meter"? Tesla responded with a no, that's the point.

I know that this UFO information may come as a shock to some, and to others, it is information they have seen and read about before. The only difference is now the U.S. government is certifying that UFOs or UAPs are real.

I'm glad that the U.S. is finally acknowledging the existence of UFOs, it has only been about 70 years since the Roswell crash and Project Blue Book.

American citizens have been reporting and sharing stories, home pictures, and videos of UFOs for more than a hundred years. The only problem was the government officials told them they could not disclose their information due to national security. However those that did go public were mostly disregarded or told they were crazy.

Aliens have been among us for centuries, and this information is in all manner of documents and the Akashic records.

The Book of Enoch chronicles Enoch being taken to Heaven to speak with the divine beings and returning with "new" knowledge. Again in 2500 B.C. Sumerian tales tell of one of their leaders being taken up to the heavens by "Gods". The Gods taught him mathematics, science, and how many planets are in our solar system. All of this knowledge is depicted in one of their stone scrolls for you to see. Remember that this is 6,500 years before Copernicus published his model of our solar system revolving around the sun.

In ancient India, the Mahabharata (the great epic of Inda) volume of books talks about flying cities or fortresses called Vimana. The Sanskrit translation means "a car or a chariot of the gods, any self-moving aerial car sometimes serving as a seat or throne. Like Enoch and others, the "space" people communicated with them and let them travel the solar system with them.

I can cite dozens of biblical references for you, but I would like to bring your attention to the not-to-distant past of the 1950s. For instance, George Adamski, a man you probably have not heard of, is, in my estimation, the father of UFO sightings and visitation. He was a well-known lecturer and teacher of Tibetan philosophies and was out in Desert Center California, with five friends on November 20, 1952, when he spotted a UFO. Subsequently he went out by an outcropping of rocks to see if the craft had landed. To his surprise, a man wearing a blue jumpsuit was waiting for him. It was a spaceman, and he was communicating with George through gestures and telepathy. The being let George know that he was from Venus and that he intended to make humans aware of the existence of extraterrestrials.

Most importantly, the alien let George take photos of the craft. Later, investigators analyzed the pictures for authenticity, and as it turned out, the spacecraft was determined to be authentic. The analysis also showed that the craft had been built to the mathematically perfect Golden Ratio specification. To learn more about the Golden Ratio, click here. In other words, the spacecraft was designed with great intention and used a math standard that has been around since the ancient Hindu–Arabic times around the 12 Century.

If you'd like further clarification, look no farther than the government-funded Project Blue Book. The project began in 1952, and four years later, a U.S. Air Force Pilot confirmed that he chased a UFO in the exact location (Desert Center California) that George Adamski gave on the same date of November 20, 1952.

You Won't Believe Your Eyes

If we are to learn anything from Geroge Adamski and his visits from ET's, it is, that we are not unlike our galactic brothers and sisters. He postulated that if there are billions of suns in billions of galaxies, then there are billions of planets that can sustain and manage life. It is also not hard to believe that most of those planets have evolved from fear and war and are focused on exploring. That is to say they have moved toward the support of their people and the beings in the universe around them.

How can people from other planets be here and we don't see them? How come only a few people have seen UFOs? I'll offer you some basic science examples and you can decide for yourself if this is real.

I wrote about the light spectrum we humans have to see our world back in March of this year. Human vision spans a spectrum or frequency of approximately 390-720nm. At the short end of the spectrum is (390) or what we perceive as blue (ultraviolet). The long end (720) is what we perceive as red (infrared).

Remember back at the beginning of this post, I shared that the Navy could only start recording the UFOs when they updated their cameras to infrared? The light spectrum that humans use comprises less than an estimated 1% of 1% of the entire electromagnetic spectrum available. In translation, we see less than .001% of the accessible light source in our world. Imagine what we are missing with our eyes.

What Do They Know?

Adamski spoke with the Venitian man on several different visits about the multiple frequencies or vibrations that supports life. The "Spaceman" replied that multiple dimensions and higher vibrations do exist, however, we have not received the training to experience them here on earth. These vibrations are equal to the light spectrum I describe above. Ultra-violet on one side and infrared on the other.

See my chart for just how small our vibrational spectrum is for tangibility above:

As you can see, the universe is quite a bit more complex than we have been lead to understand. As a result, when we hear about UFOs or aliens, we immediately dismiss what we hear as fake. If we can't see the proof then it is not real. It is like you're a horse that is wearing blinders. You are only allowed to see what the driver wants you to see. It is not beneficial to the carriage driver to have their horse looking around and slowing them from their destination.

There are many reasons why we do not have access to this new knowledge of metaphysics, but the information is here before you to examine if you choose. You have a choice to investigate the thousands of individual claims of visitation, contact, and travel with other intelligent life forms. I have only given you a few examples, and I plan to provide more in future posts.

Remember, these encounters have been going on for centuries. If there were any great plan to dominate this world, it would have been executed a long time ago. They are not interested in creating fear or manipulation. They are multi-dimensional beings that are interested in our growth. Why do you ask? Let me answer with a question.  Why do we send money for relief to people around the world that we don't know? Why do we practice our different religions based on love and charity? My belief is that it is a universal desire to care for and support each other in our growth.

I will leave you with this last thought from George Adamski before his death in 1965. They are already here among us in every country and integrated within our society. The message they want to share with us is; bring peace and understanding to your daily life. Purposefulness in life seems to capture most humans, they would like us to know that our curiosity and awareness are our purposes. Do not be afraid to fail and endeavor to forgive yourself and others as you continue to move forward.

Oh, What a Dream