What do John D. Rockefeller, the University of Chicago, and the American Medical Association (A.M.A.) have in common? If you said being granted your medical license here in the U.S., you'd be correct.

So, how does a Billionaire oil tycoon get involved with licensed doctors practicing medicine? And what effect does that have on our lives today? Read on, and I'll give you the high-level facts.

First, as you may or may not know, John D. Rockefeller started the Standard Oil Company. It was the largest petroleum company in the world, and its success made its co-founder and chairman, John D. Rockefeller, one of the wealthiest Americans of all time and one of the richest people in modern history. Rockefeller's net worth in 1911 was $11B; adjusted today, that would be $345B.

Rockefeller ran the company as its chairman until his retirement in 1897. He remained the major shareholder, and in 1911, with the dissolution of the trust into 34 smaller companies, 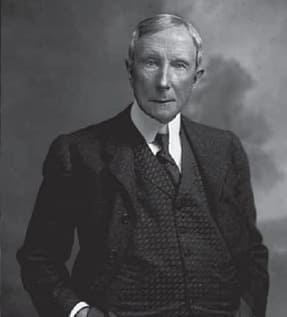 Rockefeller became the wealthiest person in modern history, as the initial income of these individual enterprises proved to be much bigger than that of a single larger company. Standard Oil of New Jersey, the entity controlling Standard Oil at the time of the breakup, has since continued and today is known as ExxonMobil, the largest investor-owned oil company in the world. As a result, many other companies across multiple sectors are either direct descendants of Standard Oil (such as Chevron and Marathon Oil) or have acquired a Standard Oil descendant (such as B.P. and Unilever). You can read more about holding companies on my blog here. 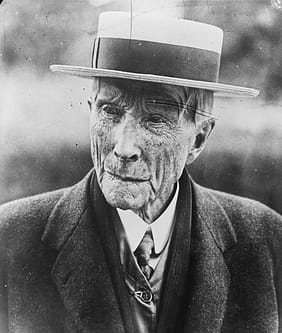 in 1890 by the American Baptist Education Society, using $400,000 donated to the ABES to supplement a $600,000 donation from Standard Oil co-founder John D. Rockefeller. Furthermore, the Rockefeller donation provided money for academic operations and long-term endowment (funding); he did not want the money spent on buildings.

The University of Chicago (UChicago, Chicago, U of C) is a private research university in Chicago, Illinois. It is also among the best universities in the world and the most selective in the United States. Furthermore, if you want to get a degree in medicine, it is ranked in the top three, including Harvard University and Johns Hopkins University.

We must Have Rules!

Meanwhile, The American Medical Association (A.M.A.), a professional association and lobbying group of physicians and medical students, was also headquartered and incorporated in 1897 in Chicago, Illinois. The A.M.A. established the world's first national code for ethical medical practice, the A.M.A. Code of Medical Ethics. The organization educated people about the dangers of patent medicines and called for legislation regulating their production and sale. One resulting legislation was the Drug Importation Act of 1848. The act required imported drugs to meet the standards for strength and purity established in the U.S.P. While the act's enforcement was ineffective and short-lived, the legislation helped solidify U.S.P.'s status as a national compendium and set a precedent for future federal drug laws.

In 1904, the American Medical Association (A.M.A.) created the Council on Medical Education (C.M.E.), whose purpose was to restructure American medical education. At its first annual meeting, the C.M.E. adopted two standards. First was the minimum education required for admission to a medical school. Second is a defined medical education consisting of two years of human anatomy and physiology training and two years of clinical work in a teaching hospital. Consequently, if you didn't have the money for this higher education, you would not be a licensed M.D. in the U.S. As a result, this would eliminate a majority of the population from participating based on their economic status (middle-income to poor people).

Open to all, except a few

Furthermore, in less than four years, the A.M.A. and C.M.E. wanted to fast-track conformity of all medical schools to use their new standards. In 1908 the C.M.E. contracted with the Carnegie Foundation for the Advancement of Teaching to survey American medical education. As a result, the Carnegie Foundation, in concert with the C.M.E., funded the Flexner report, a book-length landmark report on medical education in the United States and Canada, written by Abraham Flexner and published in 1910.

Above all, this report called on American medical schools to enact higher admission and graduation standards and adhere strictly to mainstream science protocols in their teaching and research. Hence, the report discussed the need for revamping and centralizing medical institutions. Many American medical schools fell short of the standard advocated in the Flexner Report, and after its publication, nearly half of such schools merged or were closed outright. Colleges in electrotherapy were all closed.

Similarly, Homeopathy, traditional osteopathy, eclectic medicine, and physiomedicalism (botanical therapies) were ridiculed and mocked for quackery. Flexner's report stated that there were too many medical schools and doctors in the United States. So, the closure or consolidation of university training included all but two black medical schools and the reversion of American universities to male-only admittance programs to accommodate a smaller admission pool. As a result, female admission ended. Only in the mid-to-latter part of the 19th century, with the founding of the co-educational Oberlin College in 1833 and private colleges such as Vassar College and Pembroke College, would allow women to train for an M.D.

I have just been handed a Report...

Where is Rockefeller at this point? To help with the transition and change the minds of other doctors and scientists, John D. Rockefeller gave many millions to colleges and hospitals and founded a philanthropic front group called "General Education Board" (GEB). The GEB was a private organization created by Rockefeller with a donation of $1M ($31M today) in 1902. Consequently, Rockefeller's total contributions amounted to $180M ($3.8B today).

Original members of the GEB were: William H. Baldwin Jr., Jabez L.M. Curry, Frederick T. Gates, Daniel C. Gilman, Morris K. Jesup, Robert C. Ogden, Walter Hines Page, George Foster Peabody, and Albert Shaw. In 1920 the president was Wallace Buttrick, and the secretary was, you guessed it, Abraham Flexner. In 1960 the GEB ceased operating as a separate entity when its programs were absorbed into the Rockefeller Foundation. Valued at $6.3B, the Rockefeller Foundation is an American private foundation and philanthropic medical research and arts funding organization based at 420 Fifth Avenue, New York City.

Take special note of Frederick T. Gates. He was an American Baptist clergyman, educator, and principal business and philanthropic advisor to John D. Rockefeller, Sr., from 1891 to 1923. Remember, at the beginning of this blog, I told you that the University of Chicago was created by donations from the American Baptist Education Society and Standard Oil co-founder John D. Rockefeller. So, now we see that a billionaire oil man is funding a prominent private medical college (U of C), setting industry standards for admission to any U.S. medical college (A.M.A.), and developing criteria (Allopathic medicine) to graduate and practice medicine. Are you still with me?

What is allopathic medicine? It is the standard U.S. system for all AMA-approved/licensed health care. A system in which medical doctors and other healthcare professionals (such as nurses, pharmacists, and therapists) treat symptoms and diseases using drugs, radiation, or surgery. Also called biomedicine, conventional medicine, mainstream medicine, and orthodox medicine.

I am getting back to Frederick T. Gates for a moment. He is a man I will dedicate an entire blog later this year. However, it is worth noting that Gates convinced Rockefeller that he could have the most significant impact by modernizing medicine, especially by reforming education, sponsoring research to identify cures, and systematically eradicating debilitating diseases that sapped national efficiency from the workforce.

If you had all the money in the world, wouldn't you want to ease the pain and suffering of others? Most of us would, and I believe this was the original intent. Furthermore, most medical professionals and nontraditional healers are here to serve us with the tools and knowledge that are available to them. Based on the information I shared, we can plainly see that the singular approach to treating a symptom (allopathic medicine) is limited. A disease is just that, the dis-ease of the individual. Looking at the whole body, mind, and spirit, we can treat the root cause while attending to the pain or dis-ease.

As I close this article, I want you to understand the root of the pharmaceutical business. In the early half of the 20th century, the Rockefeller family sponsored research and donated hundreds of millions to universities and medical schools with drug-based research. They extended this policy to foreign universities and medical schools where the main study was drug based through their "International Education Board."

Establishments and analyses that were not drug-based were refused funding and soon dissolved in favor of the lucrative pharmaceutical industry. In 1939 a "Drug Trust" alliance was formed by the Rockefeller conglomerate and the German chemical company I.G. Farben (Now known as Bayer). Side note: Bayer acquired Monsanto (producer of Roundup weed killer found in most of our food today) for $63 billion in 2018.

After World War II, I.G. Farben (Bayer) was dismantled but later emerged as separate corporations within the alliance. These companies included General Mills, Kellogg, Nestle, Bristol-Myers Squibb, Procter and Gamble, Roche, and Hoechst (Sanofi-Aventis). In tandem with Chase Manhattan Bank (now JP Morgan Chase), the Rockefeller family owns over half of the pharmaceutical interests in the United States. It is the largest drug manufacturer in the world. Since WWII, the pharmaceutical industry has steadily netted increasing profits to become the world's second-largest manufacturing industry after the military-industrial complex (arms-building sector).

And Now you Know

One last point. What is the root compound found in pharmaceutical pills?  Petroleum (A.K.A. oil) a plentiful source of organic molecules that feed into the drug synthesis process. Some sources cite as much as 99% of pharmaceutical feedstocks and reagents from petrochemical sources. Petrochemicals are chemical compounds from oil and natural gas. They are used to create many products that we use every day, like pills and medical supplies.

Last question, who is the man that owns the largest petroleum company in the world? Who is the man who created and or funded the AMA, GEB (now the Rockefeller Foundation)? Also, who owns the private University of Chicago and supported the Flexner Report? What company holds most of the stock in drug and chemical companies worldwide? And what are you prescribed by a doctor when you need pain or disease relief? A plant-based medicine or a pharmaceutical?

It all started with one man. That is the power each one of us holds. There is no blame here, only information. What do you want to do with this information? You have always had the power of choice.

Planting Trees for Others