You Won’t Believe Your Eyes

HERE’S TO YOUR HEALTH

In the past twenty blogs I have written, I have mentioned that I have always loved the Chevrolet Corvette. Today I will share with you my personal story about how I came to order my personalized version as well as enjoying a Corvette Museum delivery too.
My Grandfather sold Chevrolet's for about 40 years and do to his and my father's influence I was born a fan of General Motors (GM). My dad had always purchased GM's so they were always in our driveway.
I was brought home from the hospital in a 1964 Chevelle (non-SS) in October of 1966. My family did vacation road trips in various Chevy and Pontiac station wagons and my first car was a 1973 Olds Cutlass S. So, as you can see I'm well versed in owning and fixing all makes of GM cars.
I grew up in a modest mid-west suburb outside of Chicago and there were not a lot of Corvettes to see, so when one was driving down the road it was kind of a big deal. My brothers and sisters would always be on the lookout for one and point it out to me when they spotted one.
This was my life from 8 years old on through my 20's.
When I got engaged to my wife, she accepted my proposal but said she didn't want an engagement ring. She said you should take that money and buy what you have always wanted, a Corvette. Now, this threw me for a loop as I was fully expecting to purchase a ring for her and the thought of owning a Corvette was the furthest thing from my mind at the time. But being the fast thinker that I am, I happily agreed to take her advice.
Now I had a new problem. Which Corvette should I buy? I loved all versions of the Corvette (C1 - C5 at the time) and depending on the year I could purchase almost any of them. After a lot of thought and consideration, I decided my first Vette should be one that I alone have ordered and owned. 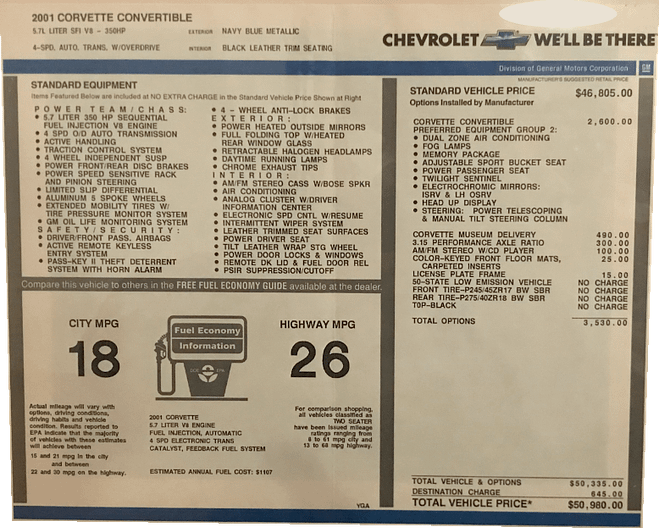 I quickly called my brother who had a friend that was a general manager of a Chevrolet dealer and told him I wanted to custom order a new 2000 Corvette convertible in Navy Blue Metallic, a black top, and interior. I also ordered the optional preferred equipment group 2, which included dual-zone air conditioning, fog lamps, memory

seats, sport seats, twilight sentinel, electronic mirrors, head ups display, and tilt, telescoping steering. I also special order a 3:15 gear rear end from the standard 2:73, upgraded Bose stereo with CD player, color-keyed floor mats, and Museum delivery. All in I was at a retail cost of $50,980.00.

I had just ordered my dream Corvette and was able to get a price below the sticker that I was happy with.
Now I had to figure out how I was going to get to Bowling Green Kentucky to pick up my Corvette.
As luck would have it my boss called me and said that this year's sales event was taking place in New Mexico at a new golf resort in May. I also got a call from my Chevy dealer who said you missed the 2000 year delivery so you'll be getting a 2001 Corvette and it will be ready in May. Problem solved, I'll fly to New Mexico to enjoy the sales meeting and then fly to Tennesee to pick up the Vette. Yes, Tennesee as that is the closest airport to Bowling Green. Now the days have to line up. Guess what, they did. As a matter of fact, they lined up to the date perfectly.
Everything was coming together nicely and I made my plans to attend the sales meeting and then fly from the event to Bowling Green. I was on my way to picking up my dream Corvette.
As I was sitting in an audience of about 500 other salespeople in a large conference center in New Mexico in early 2001 a man stepped on stage and introduced himself. He said he was the president of the company I worked for and that there were going to be drastic reductions in force (people getting fired) due to the dot com bomb that was happening in the U.S. in late 2000 and early 2001. For those of us, that remember the late '90s were the beginning of the internet craze and this new business idea called .com's that where internet-based companies. These companies were getting a lot of attention as well as funding by investors. Companies like eBay, Amazon, and about a million others. And my company did a lot of technical consulting and building out of infrastructures that made these companies work online. But, a lot of these companies didn't succeed and those sold contracts were null and void as the money dried up.
I remember sitting in my seat listening to this guy say most of us would be fired soon. I also remember thinking, you've got to be kidding me, I just bought a fancy convertible and need to make payments on it. Then I remembered something. I had sold to several large companies that weren't solely internet-based and had stable balance sheets. And that I was good at selling. I took a breath and knew everything was going to be fine. Shortly after the message was delivered my boss came up to me and said quietly into my ear that I was safe and no one was firing me any time soon.
I had arrived in Tennesee the evening before my pick up day or as Chevrolet calls it, the museum delivery day. I checked into my hotel and relaxed for the next day of excitement.
The following morning started at 8 am where I would have a personalized presentation on the history of the Corvette in the museum's theatre, next I was driven over to the Corvette plant across the street and got to see the manufacturing process of my favorite car, and then I'd go back to the museum to get a personal tour and finally have my Corvette revealed to me for the first time.
There it was, a beautiful Navy Blue Corvette convertible with my name on it behind red velvet ropes. The presenter gave me a personalized museum delivery plack and the keys to my new car. I was over the moon.

The presenter said go ahead and sit in the car and I'll get your paperwork. So I did and a little old couple came by and said hi. The woman said can I ask you a question and I said sure. She asked if I was a drug dealer. I laughed and said no, worse, I sell for a living. She gave me a crooked look and moved on. Welcome to Corvette ownership... 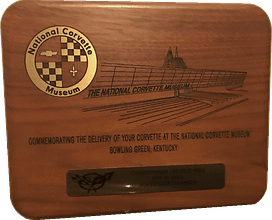 As I drove the 250 miles home I enjoyed every special moment of my new car. The thumbs up and the wanting stares. The happy faces as I drove by and kids at the park pointing my car out to their friends.
I remembered as I was a little boy and thinking about how I would love to own this special car someday myself and here I was, driving my new Corvette some 25 years later and loving it. How lucky am I?
Dreams do come true and I am living proof. I hope you honor those who possess what you want and dream about the day you might get to actually have what you always wanted.
All my best to you!