You Can't See The Forest Through The Trees

If a tree falls in a forest and no one is around to hear it, does it make a sound? If it doesn't, that's ok because this is a philosophical thought experiment that raises questions regarding observation and perception. Can something exist without being perceived by consciousness? Can we assume the unobserved world functions the same as the observed world?
These questions came to me when I read the Viktor Frankl novel, Man's Search for Meaning. On page 69, Frankl is in the Auschwitz concentration camp medical hut helping a woman who is dying of Typhoid when they struck up a conversation. She told Frankl that she was glad fate had hit her so hard and that she didn't take spirituality seriously in her "free" life. She pointed to a tree outside and said that the tree was her only friend in her loneliness. She went on to tell Viktor that she often spoke to the tree and it to her. Frankl asked, what does it say? She replied, "it said to me", 'I am here - I am here - I am life, eternal life.' "

The Search for Meaning 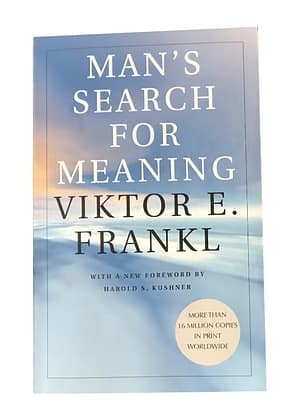 After I read that passage in the book, I immediately thought of the root networks of trees and how they were connected. I remembered hearing about how they could communicate between themselves and with the surrounding nature. I knew I had to do some more investigation. The following is what I found out about trees, communication, support, and us.
In my opening sentence, I gave you a riddle, and here is the answer. After a tree falls, the surrounding trees already knew it would happen. They either knew it was dying and gave it nutrients to live or were given nutrients from the dying tree for their growth. The trees can do this through their personal w.w.w. (Wood Wide Web) network. How do I know this? I read supporting documentation from let's talk science, a Canadian charitable organization. They have been providing evidence-based STEM programs to Canadian grade school children for more than 25 years.  Here is what I know for sure: I didn't have the slightest clue what information was available to me through the flora and fauna in my yard. Therefore, any new information that comes to me can only help me see the bigger world around me.

The Magic of Trees 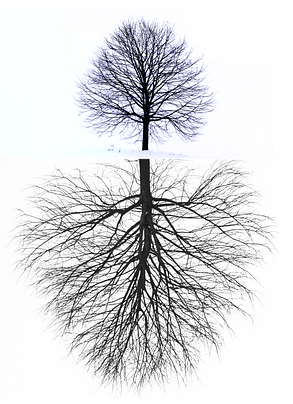 Take trees, for example. If you are lucky like me, you see them every day. Full disclosure, I have always talked to my trees when I'm in my yard. I feel a bit weird doing it, but I also feel their energy. It turns out I was on to something. Scientists have been exploring the theory that trees communicate underground through the network of roots and fungi.

Simply stated, Fungi are a group of living organisms that are classified in their kingdom. Meaning, they are not animals, plants, or bacteria. Unlike bacteria, which have simple prokaryotic cells, fungi have complex eukaryotic cells like animals and plants.
Many kinds of fungus have the majority of their bulk underground. This underground fungus grows in threads called hyphae. These threads live among the tree's roots and create the communication network called a Mycelium. This network of entanglement between two species is called Symbiosis and benefits both organisms. The tree's ability to create food through photosynthesis shares that food with the fungi and the fungi find and absorb nutrients from the soil to give back to the tree. This partnership is also extended to saplings in the surrounding areas. The trees use the fungi to transport nutrients to young or failing trees to keep them alive or thriving.
This transport goes beyond feeding and caring. It also helps the trees survive threats too. For example, if threatened, a plant could change its biochemistry by increasing its levels of toxins and repellents in its tissues to deter pests. Another amazing protective trait that trees have is they can change their biochemistry. This is done by producing airborne compounds that attract the natural enemies of a particular pest.
Imagine a world where there is a physical and chemical connection that is both helpful and self-sustaining. What would you do if you had that power?

Now, let's take this to a higher level of consciousness and see where our friends, the trees, take us.
A keystone in the tree-fungi networks is something called the hub trees. Also referred to as “Mother Trees,” these are the older trees in a forest. Typically, they have the most fungal connections. Their roots are established in deeper soil and can reach deeper sources of water in which to pass on to younger saplings. Through the Mycelium network, these Mother trees detect the disease of their neighbors from distress signals. When the Mother tree experiences this disturbance in the network, it sends them needed nutrients to assist in the healing process.
Remember, all life on this planet is interdependent. We can not survive without the oxygen trees produce, and the trees can not survive without the carbon dioxide we expel. You don't have to be a "tree hugger" to realize how important it is that we pay attention to forestry and conservation.

If you want a forest to grow back and survive, you need the established network of Mother trees in place to make it happen.
How aware and sensitive are trees? According to the tree-whisperer Peter Wohlleben, trees can feel pain, and they have emotions, such as fear. They like to stand close to each other and cuddle. Trees adore company and enjoy taking things slow.

All of this may seem like a fictional story however, you can see from the data above, all life is interconnected and expresses its own versions of feelings. There are many different life forms, but that does not mean we can't establish communication with them. Luckily for us, we have scientists and philosophers who will gladly do the legwork for us. Take, for example, Suzanne Simard, an ecologist from the University of British Columbia. At a young age, she was intrigued by the large and complicated root systems of trees that she saw growing below the ground. As she grew older, she would continue her education. She would eventually establish a new understanding of how trees communicate and participate in the growth of a healthy forest. She would be an instrumental participant in the Hub or Mother tree theory that supports the vast below-ground mycorrhizal networks.

Our World is Far Bigger Than You Know

Together Peter and Suzanne have allowed us to better understand the world around us and under our feet. They allow us the opportunity to know that we are more than we appear to be. We are creators in a collaborative world. We are not only individuals but part of a vast network. We have never been alone, and we never will be.
So the next time you pull out a picnic blanket and lay under that mighty Oak tree, remember to thank it for its shade and beauty. Chances are, it is listening to every word you say.

You Came Here to Have Fun!