Finding Out Who You Really Are

How Did Christmas Become Christmas?

I always thought that the 12 days of Christmas started on the 13th of December. My hypothesis came together by looking at the advent calendar on my kitchen counter, and I worked backward from the 25th. Yes, my approach is very scientific and impressive, but it turns out I was incorrect.  Immediately, I started to wonder if there was a hidden meaning in the twelve days of Christmas. It turns out there is.

As a result of my research (not completed in the kitchen), the 12 days of Christmas start on December 25. The day that Christians declared Jesus was born. Consequently, the twelve days that follow is the amount of time it took the Magi, three wise men, to locate the baby Jesus in the manger. This 12th day (January 6) is known as the Epiphany or three kings day. In other words, these celebrations are based on the Roman Catholic Churches calendar and are mostly celebrated throughout Europe.  So, some of this may be news to you.

In keeping with the Christian calendar, I also offer you this insight into the popular song, "The Twelve Days of Christmas," and the theory that it is a canard and the music has significant meaning for the faithful. That is to say, I believe that everything has a built-in meaning or secret, and based on the information from the website Snopes, I will break down the lyrics and let you decide.

Is There a Story? 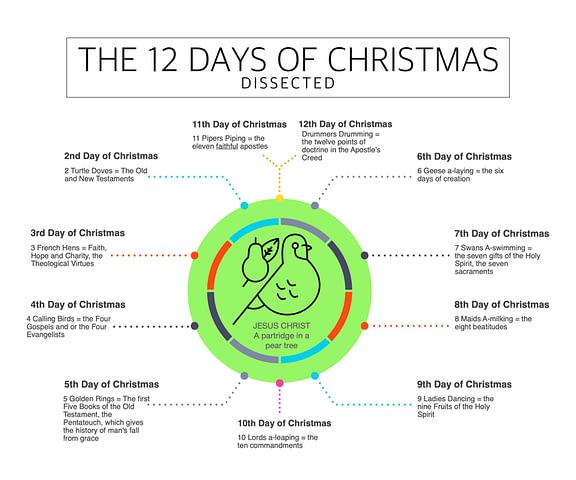 In short, based on the myth, this song is to help Christians of the 17th century pass on their history while escaping persecution from those who would seek to suspend their message.

An astronomer Dave Reneke used computer models to determine how The Star of Bethlehem might have been created. He postulated that Venus and Jupiter might have come together to form a bright light in the sky. After his tests and research, Reneke determined that this rare event occurred on June 17, in the year 2 B.C. 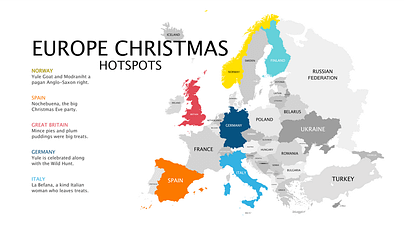 So why would the Catholic Church change the date of Christs' birth? Again, I will go back to the idea of hidden messages and meanings in our yearly celebrations. To begin, we must start with the Pagans. Who were they?

They lived and worked within the Roman Empire and practiced polytheism (several Gods).

One of their Gods was Saturn, the Roman god of agriculture, liberation, and time. The Roman people or Pagans celebrated Saturn as Saturnalia, a time of feasting, role reversals, free speech, gift-giving, and revelry. The celebration was After the solstice, the darkest night of the year, the renewal of light, and the coming of the new year was celebrated in the later Roman Empire at the Dies Natalis of Sol Invictus, the “Birthday of the Unconquerable Sun,” on December 25.

Therefore, this particular celebration appealed to the Roman people as it was a time to let go of all the cultural restraints. People were encouraged to relax, eat and drink until their heart's content. These celebrations and traditions had manifested in different ways throughout Europe and were called many things. For the Germanic and Scandanavian celebration, Yule was the term.  St. Nicholas, a Fourth Century Lycian bishop from modern-day Turkey, helped create the legend of Santa Clause based on his kindness to the poor.

Moreover, a tale states that Pope Julius I, settled on December 25th as the official date of the birth of Jesus. Many believe that the church was eager to build its membership in the Catholic church and couldn't compete with the Pagan holiday Saturnalia. So instead of trying to compete with the Pagan festive holiday, the church decided to employ many of its rival's traditions that allowed for an easier transition.

Christmas had a stronghold with many Pagan people, and most converted to Christianity. It was a time of fun and merriment for all. Unfortunately, some took it further with public displays of drunkenness and frivolity. All of this "fun" didn't sit well with the Puritans, and when Oliver Cromwell and his Puritan band of loyalists took over England in 1645, they vowed to rid England of decadence and canceled Christmas.

As you can imagine, this did not sit well with the peasants of the day, and through their overwhelming support, Charles II was restored to the throne, and true to his word, he reinstated the popular holiday.

In the early 19th century, Washington Irving single handily converted a raucous holiday into a family-centered and spiritual day. Washington Irving wrote The Sketchbook of Geoffrey Crayon, gent., a series of stories about the celebration of Christmas in an English manor house. His writings feature a wealthy man who invited the working class into his home for the holiday. Irving thought that Christmas should be a peaceful, warm-hearted holiday that showed the spirit of love and thoughtfulness more than just the self revelry of the past. Washington's book was not based on any one specific holiday that he had attended; many people believe that he “invented” tradition by implying that it described the authentic customs of the season.

God Bless us, Everyone

And finally, what would Christmas be without Scrooge? You can not go through an entire holiday season without watching this extraordinary tale of redemption. Charles Dickens wrote "A Christmas Carol" on December 19th in 1844. This novel touched the hearts of millions of people in the U.S. and Europe and created a charitable movement still felt today.
I will write a dedicated post on Dickens, as he has offered far more to Christmas than I could write here.

What Have I Learned?

In my quest to understand the 12 days of Christmas, I have learned that not all things are as they appear. And that no tradition should be taken as literal and forever.

The one thing I can do is take the meaning of Christmas as a time in the year where I can relax, have fun, be thankful, and most importantly, give of myself to others. I hope in some way I have done that here.